Since the premiere of the hit ABC show Scandal last year there has been a spotlight placed on infidelity, mistresses and side chicks. This is no new epidemic, men have been unfaithful for years but there was no public spectacle to made about it. Mistresses are nothing new, Elizabeth Taylor was Richard Burton’s mistress for years before becoming his on again off again wife and ex-wife. Women who choose to engage in intimate relationships with men are either married or in a relationship are highly scrutinized by society, but one thing you don’t and won’t hear about are men that play the sideline. What a shocker it must be for a man to realize that he is a side line nigga. It has been my experience that men don’t think that it can happen to them, that women aren’t smart enough to play their game and make them number two. Well, I hate to be the bearer of bad news but there is a such thing as a nigga on the side. 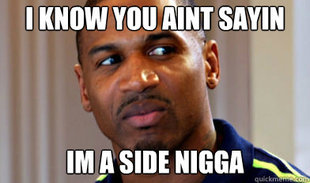 Let me first define for you what a side nigga is, it is merely the equivalent of a side chick or a mistress. He is simply a convenience, only good for sex and should not be inserted into any real aspect of your life. Like a mistress this man is often only good for his intended use which is sexual satisfaction and are not to be invited to birthday parties, family cookouts, or funerals. Unless a man is playing the side of a woman who is wealthy there really isn’t much that he benefits from being boyfriend number two aside from sex, as I previously stated his role is to do one thing and thing only, and that’s to please her sexually. As with any affair, not being the main spouse has its advantages, one of which being less of a headache. Relationships come with responsibility, duty and honor, an affair should come with good sex and little conversation. Some men are meant to be nothing more than a side nigga, they just simply aren’t relationship material. Just like with any other instance there are exceptions to every rule, and there are some women who cheat mentally, and emotionally with her body only following suit. This to me is really no exception because this is where feelings become involved, and decision-making gets cloudy. When I spoke of men being a jump off on Twitter the response I received from my male followers was quite comical. Most of them expressing that being a side line to another man would be the ideal situation for any man. Also that if a woman was sleeping with another man outside of her relationship then she was a hoe. This comment alone speaks volumes of the fact that men can dish it but can’t take it. Men can and will cheat all day, everyday, no problem and his woman will never find out. But the moment he finds out that he is a side nigga to his side chick his feelings become an issue. There are just as many side niggas as there are side chicks, let that marinate. I wonder, as a man how does it make you feel to know that a woman sees you  as nothing more than a sexual conquest?

“After a long day of tryin to make my songs pay, makin love all day against the wall in the hallway.
Ya fantasies come alive, ya heart rate shall increase when we meet up in this dark place.
You might think you’re happy with him but that’s a lie, so give this Thug a try. I’d rather be ya nigga”
~Tupac~